I know this is not roller coaster related, but it is theme park related. And if you like theme parks, and South Park….you will like this. And you can’t deny the cameos.

Thought I would share abit of coaster history that I found out today. Below (left) is the Giant Coaster which is a 1917 coaster in Massachusetts. That coaster was moved to Maryland in 1986 and called the Wild One (right). Why was I looking at this today? Well I used to be the ride operator for the Wild One.

It was very cool to operate. The ride had one button for the lap bars and the rest of the ride was controlled with levers. You have to lift and lower levers to get the trains in, parked, and out of the station.

The entire ride was transported to Maryland, but a helix was added at the end. If you are in Maryland you should check that ride out.

Hey everyone...new to lj....wanted to share a roller coaster in my area.  This is Expedition Everest in Walt Disney World 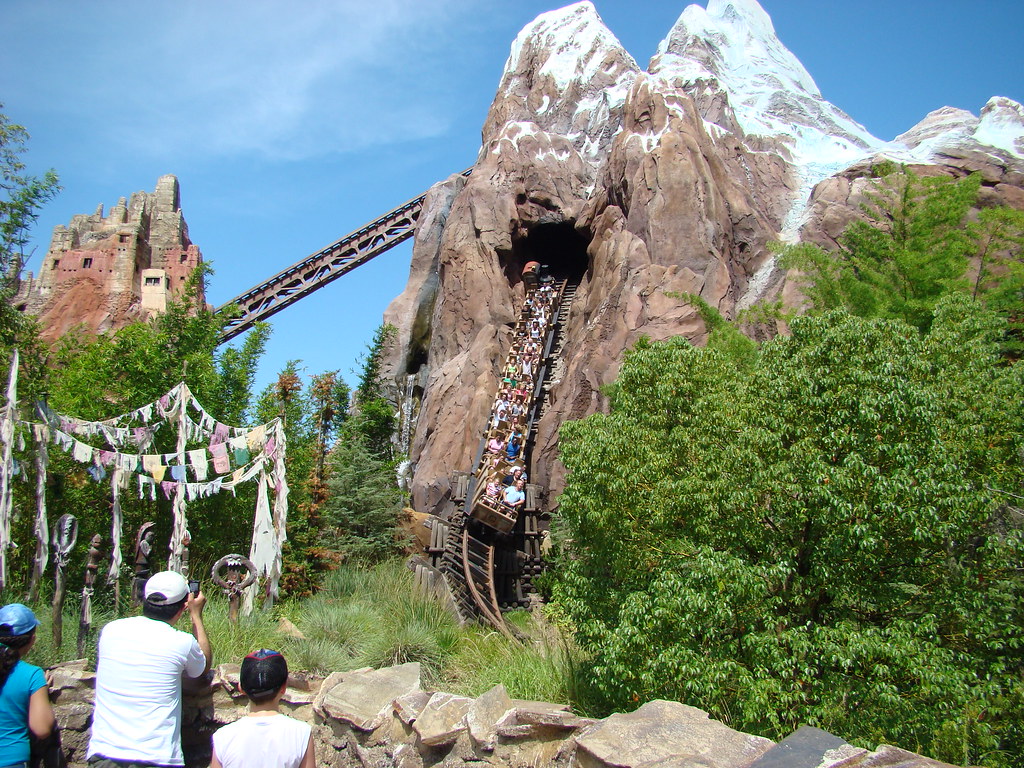 Knightmare roller coaster, new at Camelot for 2007! Camelot theme park are installing their biggest roller coaster ever. I'm more excited about Camelot's Knightmare than all the other new rides this year. This particular ride is regarded very highly among coaster fraternity, not just for its height & speed, but its a really intense ride with non-stop action for the whole 2 minutes, look out for the 'psycho drop' mid way through the ride! Knightmare will subject riders to more G force than any other UK roller coaster, its a thrilling, classic roller coaster everyone can enjoy - Scroll down page for plans & press releases.
Camelot very kindly guided me around the site in May when the main structure & track had just been completed. Work was under way to install the electrics, motors, brakes, and the chain...

Despite protests & attempts to save the Cyclone, on November 20th 2006, D&M Demolition crew moved in to raze this classic wooden coaster...

The Cyclone at Pleasureland Southport opened on Good friday 1937. A figure-8 wooden coaster which is 2500 ft long. Although the coaster was designed by Charlie Page, the original station was designed by Joseph Emberton Riba. The station was rebuilt in 1985 following a fire.
On Mon 18th September 2006 just after 4pm, 2 protestors climbed the structure of the coaster and hung a banner reading 'SAVE OUR CYCLONE'. Police arrived and moved the protestors & their banner, and a few minutes later the press arrived and filmed for local TV news. Unfortunately, several days later 'English Heritage' refused the protestor's request for a protection order on the ride. Please visit www.schwps.co.uk, sign the petition & check out the latest on the campaign to save this unique and historic ride.

The park opened in 1913
A Merseyside fairground which opened in 1913 is to close because of falling visitor numbers, it has been announced.
Owners of Southport's Pleasureland Amusement Park said despite investment in rides it has proved "unsustainable".

More than £2m was spent on renovations in 2004, including installation of the Lost Dinosaurs of the Sahara ride.

Park directors say increased competition from other attractions and an increase in Sunday shopping and sports events led to its downfall.

The park first opened with a figure-of-eight rollercoaster and a slide back in 1913.

It was based at a site in Kings Garden but moved to its current home on Marine Drive in 1924.
Happy Opening weekend Cedar Point!

Here is an interesting article about Disneyland stuff, rumors, etc. It discusses the new Pirates of the Caribbean rehab, the "Rockit Mountain" (Space Mountain's night time alter ego) delays, and other neato stuff.

For everything from news to reviews to safety data, themeparkinsider.com has the details on nearly 70 theme and amusement parks worldwide. The reader opinions are especially useful, with ratings from 1 to 10 on attractions, restaurants, and hotels for each park.

What? CoasterQ didn't even get an honorable mention? ;)

Tatsu (Six Flags Magic Mountain's new flying coaster) track construction has just been completed. Check out some pics at ACN if you are interested.

Dollywood is opening something new next year called Mystery Mine Ride. It features a 121 ft drop over a "simulated broken trestle" and down a mine shaft. Sounds like fun. I've never been to Dollywood but want to go--especially after the success of Thunderhead.
Collapse